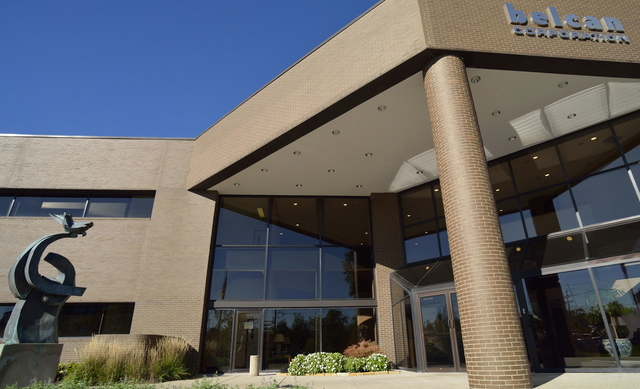 Blue Ash, Ohio – When Ralph Anderson died in 2010, he didn’t leave a detailed succession plan for Belcan Corp. (https://belcancorporation.com/), the engineering company he founded in 1958.
His daughter, Candace Anderson McCaw, jokes that’s because her father “didn’t think he was going to die.”
Although McCaw worked with her father for the last several years of his life, she said the two didn’t have detailed discussions about how the business should continue after his death.  “He did say that I could run the business just as well as he could,” McCaw told WCPO in a rare interview from the company’s Blue Ash headquarters.  It looks like Anderson was right.  As chairman and sole owner of Belcan, McCaw has overseen tremendous growth.

Building On Legacy To Grow Company

Belcan, which provides engineering services to a variety of clients in what businesses today refer to as outsourcing, posted total annual revenue of about $680 million in 2013. That’s up from roughly $450 million in 2009, said Belcan CEO Michael McCaw, Candace McCaw’s husband.

And in a major step for the corporation, Belcan on Jan. 9 renamed its staffing division BelFlex Staffing Network and launched it as a new sister company.  The staffing business ended 2013 with more than $100 million of the corporation’s annual revenue, 125 permanent employees and about 5,000 workers out on assignment, said BelFlex Vice President Bob Baer. A new BelFlex headquarters is expected to open in Sycamore Township in June or July, he said.  And BelFlex just won industry recognition, being named to Inavero’s 2014 Best of Staffing Client List based on positive reviews it received from its clients.  The goal is to grow both Belcan and BelFlex into much bigger businesses, Michael McCaw said. “We think we have the ability to build two billion-dollar brands here,” he said.
Added Baer: “We want to make Candace the multi-billion dollar woman.” McCaw laughed at the label. But that doesn’t mean she lacks faith in the idea.
Focus On Employees

Since taking over the company, McCaw has stressed time and again that Belcan’s strength is its employees, and she has great confidence in them, said Crystal Faulkner, partner and co-founder of the accounting firm Cooney Faulkner & Stevens.  “It’s all about relationships with her,” said Faulkner, who began working as an advisor to Belcan more than 20 years ago. “Candace’s focus is on how can we make this organization better from the inside out. It’s more employee-driven all across the board.”  That’s not to say the company’s late founder wasn’t focused on his employees, too.  “It started with Ralph,” said Michael McCaw, who worked at Belcan from 1980 to 1996. He left to pursue other business opportunities before returning as CEO.

A native of Harrodsburg, Ky., and graduate of the University of Kentucky, Anderson started Belcan to service a single client with his late wife, Ruth, doing the books. He grew the company steadily over the years, moving into bigger buildings to encourage more growth along the way. Always approachable, he liked to say that he wasn’t a “big shot” and didn’t want “big shots” working for him.  “People loved working for him. He had vibrancy and offered a lot of flexibility,” Michael McCaw said. “That’s where Candace is always at.”  As large as Belcan has become – with more than 5,000 employees on the engineering side of the business and 65 offices worldwide – the McCaws manage to exude warmth, Baer said.   “A lot of people feel like they’re part of the family,” he said.  That could be at least in part because the McCaws have been a team for such a long time.

A Team At Work And At Home

Sweethearts since they were students at Sycamore High School, Candace and Michael McCaw married young, when she was 20 and he was 22. They’ve been married 37 years and have three grown children – two of whom work in the business.  “Mike is my right-hand man all the time,” Candace McCaw said. The couple relishes the time working together, added her husband.  “I’m a little more analytical, and she’s got better common sense and her father’s instincts about the business,” Michael McCaw said. “We offset each other.”  Employee managers don’t dread meetings with the McCaws, Baer said.  “From our perspective, you don’t feel like, ‘Oh my God. I have to talk to the owners,’” Baer said. “It’s talking to Mike and Candace.”  The McCaws said they’re working to keep the best of what Anderson built over his decades leading Belcan and make the changes necessary to keep the company successful into the future now that its competition spans the globe.  They’re doing a bit more strategic planning than Anderson liked to do, Michael McCaw said, and they’re forming a more active board of business advisors while still working to maintain the entrepreneurial spirit of the company.  “It’s a careful balance,” he said.  For example, the company will frame the folksy “Belcan’s 19 Points,” written by Anderson, and hang them on office walls, he said. The points include such sentiments as, “People don’t find out how smart you are until they find out how much you care” and “Listen. You can’t learn anything by talking.”  But it’s moving towards a more modern corporate philosophy called “The Belcan Way,” which lists core values as “integrity, customer success, faith in people and giving back.”  “I think it’s mostly about building on what we have but doing it with a bigger company in a little bit different way,” Michael McCaw said. “We’re definitely building on strength.”  That’s certainly how Don Klekamp sees it.  “I had tremendous respect for Ralph, for his talent, for his ability to motivate people and exceed expectations,” said Klekamp, a partner in Keating Muething & Klekamp downtown who has been Belcan’s legal advisor for 25 years. “And I believe Mike and Candace are continuing on that path.”  Candace McCaw said she’s confident Belcan can build on the “rich history” her father created and get even better, stressing that BelFlex is an important part of that.  “All of us are ready to take the company forward,” she said. “The people in this company make it.”

Story by Lucy May, go to www.wcpo.com/may (http://www.wcpo.com/may). Follow her on Twitter @LucyMayCincy.
Copyright 2014 Scripps Media, Inc. All rights reserved. This material may not be published, broadcast, rewritten, or redistributed.